Students' of the Month for November 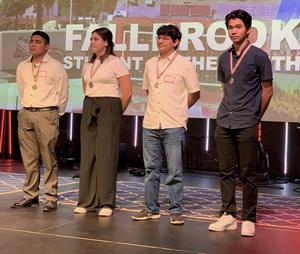 The Fallbrook Student of the Month committee recognized the Students' of the Month for November
Brayan Lux is a senior at Ivy High School.  He was nominated by Mr. Kim Gage and the Ivy High School staff for his work ethic.  Brayan hopes to pursue a career in automotive technology.  Audrey Gilcrest is a senior at FUHS and she was nominated by Ms. Marin Pinnell and Lt. Col. William Wade.  She plans on attending the United States Naval Academy in the fall.  Senior Emiliano Corona was also nominated by Ms. Marin Pinnell and by counselor Ms. Shawndra Bird.  Emiliano holds the distinction of scoring a perfect score on the ACT.  Logan Sim was nominated by counselor Alydia Aguilar.  Logan plans to pursue a career in STEAM.  We are very proud of these students and the honor they have earned.